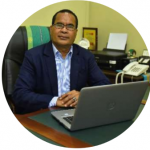 Allow me to share with you our journey to build our organization and provide quality services over the last fifteen years and my visions for the
continued development of Kaebauk.

Our journey and key achievements

We began operations in 2001 as a micro-credit program supported by the U.S-based, non-governmental organization, ‘Save the Children’.

From the beginning, our objective was to improve the livelihood of women and poor families through financial services. It has been proven that such microcredit activity is critical and very important for economic development of any country, especially understanding that there are and still are very few financial services available. The program initially only offered one product, a group loan, which provided between $50 and $100 for each group member.

In 2002, management of the micro-credit program was transferred to CRS and the program was then expanded to Baucau District. In 2002, CRS formally registered the program as an MFI under the brand of Tuba Rai Metin or TRM, which in English literally means ‘stand firmly on the ground’.

The operations of TRM were smooth with the support and supervision of CRS until the 2006-2007 crisis, which involved significant civil unrest. As a result of this crisis, 13 MFIs operating in Timor-Leste were forced to discontinue their services because of losses to assets and confidence.

The impact of the crisis on TRM was also profound. Our Executive Director decided to take refuge in Australia, which resulted in CRS losing its confidence in the rest of the team and deeming the ongoing operation of TRM to be financially unviable. As the only senior person remaining, I decided to continue TRM’s operations independently because I believed at that time that the crisis should not be a reason for us to stop helping people. I was confident to lead the operation because we had the experience of running the institution smoothly before the crisis.

I introduced many strategies to overcome obstacles at that time; one was that I had to force a large reduction of our operations. I even went on as far as asking the staff members to work without salary for a few months.

Finally, my decision to continue TRM’s operation as an independent institution has resulted in a success story. This
would not have been possible without the total dedication from such a remarkable team who continued to put their genuine commitment into TRM through very difficult times.

Some staff members even proved their honesty and loyalty during the crisis by keeping a large amount of cash at home, a necessity because there was no bank able to accept deposits in the country at that time. While many people in Dili fled their homes and became internally displaced, not a single cent was lost from the money kept by the staff.
As the country slowly returned to stability, TRM started to gain back momentum and we were able to manage all the operations independently. In the early of 2007, we began to expand again, opening a new branch in Lautem District. By the end of 2009, TRM started its partnership with UNCDF through BASIX, an experienced m i c r o f i n a n c e institution from India. As a result of this partnership, both institutions appointed a technical advisor to assist us in improving our microcredit program. The partnership was significantly beneficial and, in 2010, we started to offer various types of individual loans, including products for agriculture, small businesses and consumption loans such as housing, vehicle and education loans. In the same year, after ODTI regulations were developed by BCTL and it became mandatory for every microfinance institution to be regulated, TRM started the process of becoming eligible for an ODTI license.

TRM entered into a new phase of transformation, from being a ‘non-profit institution’ to a ‘for-profit institution’. During the transformation process, TRM expanded its branches to all 13 Districts and assisted more than 7,000 beneficiaries through its loan products. This has made us the finance institution with the widest network in the country. This journey would not have been successful without funding from Hivos Triodos, Incofin, Grameen Credit Agricole and PlaNis which provided important assistance during the difficult foundation phase of 2010-2012. From 2013 onwards, TRM started to have associations with some reputable financial institutions such as the IFC, the European Union, Incofin and BOPA. Through those associations, TRM benefited from loans, grants and technical support which served to substantially improve management processes, organization structures and our micro-credit activities. Ultimately, TRM was able to improve its Gross Loan portfolio from a mere $300,000 in 2009 to over $10 million in 2015.

As part of the process for obtaining a permanent license, the BCTL evaluated our systems at various branch offices to determine their effectiveness.

Our risk mitigation practices and internal control procedures were also investigated. Having acquired the full license, the BCTL conduct an annual on-site inspection to ensure that our operations continue to be sound, robust and in accordance with the law.

In 2015, the BCTL issued a preliminary ODTI license to TRM, a major milestone on the road to becoming the first ODTI license holder. As part of the final stage of transformation, TRM had to become a new entity, and we made the decision to name it Kaebauk Investimentu no Finansas, or Kaebauk.

All the financial assets had to be transferred to Kaebauk and this left TRM as an NGO with separate management and a focus on agriculture programs and financial literacy.

Meanwhile, Kaebauk continues the micro-credit activities initially undertaken by TRM in a more professional and transparent manner. Kaebauk is a joint stock company with four shareholders: TRM, IFC, BOPA and the Association of TURAME.

In order to create a robust internal governance regime, we have built a strong and accountable management team, reinforced the existing corporate governance structures,
refined risk management, reporting and control processes. Improving ourselves is an ongoing process in the fast changing
technology landscape and the growing expectations of
external ecosystem.

We understand that being the first ODTI Company in the country does not make us the top microfinance institution. We would need to continue to work harder and be aware of
our existing competitors such as other similar Institutions that has branches in most of the Districts, other banks with similar activities which have invested heavily in technology, processes and systems to improve their services.

This means getting and maintaining our ODTI license is not enough. We also need to work on improving our services and outreach substantially through agent banking and mobile banking with investments in IT system.

For our employees, I want them to continue developing their technical skills so that they are able to offer professional services to customers. The staffs were taught on how to assess credit worthiness of the borrower and assess various risks that can impact on the repayment of loans including character, collateral capability and capacity. This training is of vital importance for our operational staff.

IFC has supported us in providing intensive credit appraisal training for SME loans in mid 2016 and the evaluations were satisfactory. In 2017, our training department continued delivered training on credit appraisal for existing staff and newly recruited staff. We will continue to make large investments in training of our employees. Finally, with the professional and competitive services we provide to our customers, we can be one of the most reliable financial institutions in Timor-Leste.

We are committed to be job creators for the youth. In 2009, we had staff of 33 persons which have in 2017 increased to
277 employees, making Kaebauk as one of the largest employers of the country in the private sector.
At the same time, I would like to see that we continue to prepare our staff to take leadership positions.

I believe that the sustainability of Kaebauk depends on the staff members who have proven their loyalty, dedication and
commitment to the institution. In this process, we have identified high performing employees who have the potential
to fill senior positions. These employees will undergo training both in Timor Leste and Overseas.

For our business, my ambition is that, in the next three years, Kaebauk will become one of Timor Leste’s locally owned quasi-bank. Some efforts have been made to achieve this dream; for example, we are in the process of installing Core Banking system from Infrasoft Technologies Ltd –Singapore to enhance our operation to be more effective & efficient. To implement this we also received support from the European Union.

This system will be ready to operate by mid-2018. Kaebauk target to be more inclusive through mobile banking and agent banking services which will enable us to expand client outreach.

We hope to facilitate our customers’ access to services through technology, reducing their need to travel to get cash and in providing a more convenient, safe and secure way to conduct financial transactions. To tackle this issue, we will invest in educating customers to have better understanding about financial services, including how to make safe digital financial transaction services as agents or through mobile phones.

By boosting our employees and our business services, we would extend our financial services and endeavor to deliver greater social impacts, particularly for women, who comprise more than 70% of our customers. Women play an important role in the economic management of their households.

In our experience in running entrepreneurships and own business, women are more disciplined, are committed to repaying their loans, more likely to teach their children to save and pass on financial skills on to the next generation. With the improvement of our financial services, we want to continue to help Timor-Leste’s Government in developing the country’s economy. It is our aspiration that our services contribute to reducing the existing poverty.

We have worked hard, sometimes with partners and sometimes without, to help rebuild and develop our country. We have accomplished a great deal since our country’s independence. I would like to thank our dedicated employees and clients for their extraordinary efforts and loyalty on this journey. We also appreciate those who have helped to make our transformation a success, including our shareholders. There is still much to be done in Timor-Leste, and we look forward to playing an even larger role in our country’s economic development and growth.